This is an expanded version of a story that originally appeared in The Bangkok Post.

The Heart of the Golden Triangle

For decades, Sop Ruak, which means “golden triangle,” a sleepy riverbank town in Northern Thailand, was mostly just a name on the map with very few visitors. The occasional tourist who ventured there found few accommodations or attractions. However, just the name conjures up tales of drug runners and international intrigue behind the lush, green walls that form the nexus where the borders of Thailand, Myanmar and Laos merge. The actual vista is a spectacular swath of riparian jungle with the mighty Mekong River bending eastward in a great flowing mass before disappearing into Laos.

No one should be surprised that during the past decade Sop Ruak, with the sparkle of its name, has attracted a burst of five-star hotels, a hotel-gambling casino complex across the river in Myanmar, and the flowering of dozens of guest houses and outdoor shopping areas selling  hill tribe handicrafts and goods from China, Laos and Myanmar. On any day of the week now, lumbering double-deck tour buses bring up to 1,000 or more tourists a day from Asia and the West, most of whom only stay a few hours and depart. 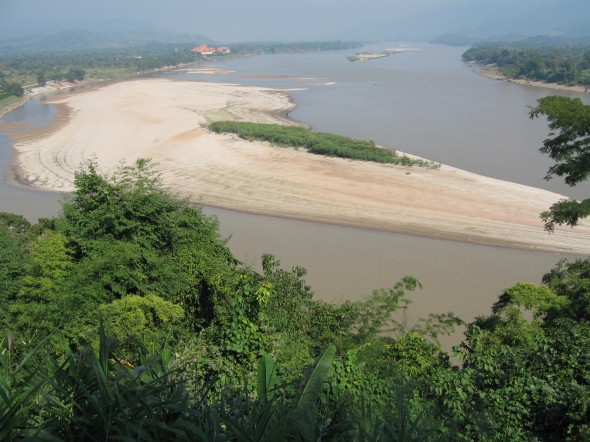 By nightfall, the tiny riverside village is quiet again, with a few overnight visitors tucked away in the luxurious hotels outside of town or in the cheaper guesthouses hidden in the town’s backstreets. The village is one of the few tourist sites in Thailand where is no garish nightlife. The only action to be found is in the sound of a radio playing at an outdoor restaurant next to the river or in the lonely silhouette of a Chinese cargo ship plying its way upstream between the shifting sandbars of the Mekong River.

Despite the daily frenzied, packaged tour side of the little town, it’s worth a stopover because of its legitimate––or illegitimate––drug running history, the Akha, Yao and Hmong hill tribes, its unique Mekong River cruises, the casino across the river in Myanmar and as a backwater border point where you can cross over into the interior of Laos.

One of the first things you see in Sop Ruak is a huge golden Buddha rising 40-feet at the stern of an elaborately designed metal boat situated beside the Mekong River. From the deck, you have a sweeping view of the river, the glistening red-roofed casino in Myanmar.

Across the street is The House of Opium, easily one of the most interesting and extensive private collections of opium pipes (sometimes called “smoking guns”), opium measuring weights, scales, lamps,  opium bowls and other items associated with “da yen,” Chinese for “the big smoke.”

The museum’s owner, Patcharee Srimatyakul, who was born in the area, started out years ago selling opium paraphernalia in a small shop. With smiling and calculating eyes, she started the museum when she saw that the opium items were  becoming hard to find and once-sold, they disappeared forever. An elaborately made ivory or jade opium pipe can sell for $3,000 or more on the collector’s market.

hilltribe girls outside the House of Opium

Mostly, she bought pipes from individuals in Myanmar, Laos and China. Now opium items are very hard to find anywhere.  Locally, the main opium users were mountain people, who call opium “black medicine.” Drug lords with private armies were known for particular “brands,” such as Deer Brand, Lion Brand or KKK Brand. Nowadays, while opium is still smuggled through the area in caravans usually entering Laos, the trade is likely to be based on methamphetamine. Opium smuggling in the area is second only to Afghanistan. Thailand has been fairly successful in eliminating most opium growing for export, but opium use is still a regular part of the mountain tribes’ tradition, especially in Myanmar and Laos.  To eliminate opium, experts say a product must be found to replace the hill tribes’ cultivation of opium, or Papaver Somniferum because opium cultivation offers poor farmers a significant income. Thailand, China, Myanmar and Laos have all made growing opium illegal, but law enforcement in Myanmar and Laos especially is nearly non-existent. It takes about one acre of cultivated fields to produce around 3,000 opium bulbs, which, after processing by a dealer, could make one kilo of opium. A hill tribe grower might receive around $1,000.

Short walk from the museum is the Imperial Resort, where the hotel’s outdoor restaurant  balcony has one of the best views of the actual juncture of the three countries that form the  Golden Triangle, especially just before nightfall when the evening light  turns pink and gray with rose-colored reflections dancing across the water.

Foreigners must get a Thai permit to cross the river to the casino in Myanmar. The permit office is in nearby Chiang Saen, a lively river port where lines of Chinese cargo ships are docked, ready to be unloaded and re-loaded to return to China. Once back at the triangle, you pass through a Thai immigration checkpoint on the river and board a long-tail passenger boat that ferries visitors to Myanmar. After a quick check of papers by Myanmar authorities,  a waiting bus  carries visitors one-half mile to the Golden Triangle Paradise Resort, owned by a Thai businessman and his Japanese partners. The casino is one of 34 that encircle Thailand, which bans casinos. The resort offers rooms from $80 to $200.  Most visitors stay only during daylight hours, returning to Thailand before the 6 p.m. ferry deadline. The casino and hotel are open 24-hours a day.

On weekends, an average of about 500 people lay down bets on roulette, blackjack, baccarat and draw poker. In a separate room, are rows of automatic gaming machines. Customers place bets ranging from US 0.25 cents to $250. Thai citizens make up the majority of gamblers. The atmosphere is like casinos everywhere except for the Buddhist amulets and lucky charms lined up in front of  tense gamblers. An expansive restaurant dishes up Thai, Chinese and Western cuisine and duty-free shops sell jade and gems from China, Myanmar and Thailand, as well as designer items.

Travelers can also book rides on the “scorpion” boats that buzz up and down the Makong River nonstop. The pencil-like, long-tail boats, which carry two to four people, are powered by a car engine decked out with an extended drive shaft with a propeller attached at the end. Cost varies up to about $50, depending on the distance traveled and the number of stops. More adventurous travelers can book a birth on a passenger boat that plies up the Mekong River to Yunnan Province in China, a two-day trip.

Experienced tourists know that to see a place you must get off the main roads, and Sop Ruak is no exception. If you take a drive or walk along the streets leading away from the river, you’ll see small thriving neighborhoods and normal life in Sop Ruak with its schools, hairdressers, small neighborhood restaurants and a placid village lake where teenagers and young couples hang out.

You’ll have a chance to meet people like Anong Sangkawadee, a middle-aged, self-taught wood-carver with a wispy mustache and goatee and a tightly pulled-back pig-tail, who was carving a large wood sculpture in front of his studio.

Taking a break, he said he never cuts down a tree to get wood to work with, instead relying on roots of trees that have been blown down or died. He likes to work with teak or rubber wood.

“There are a lot of artist in the area,” he said, “but so far we don’t have a local art gallery in Sop Ruak.  He started carving wood after a very large, revered tree blew down in the village.  “I felt sorry for the tree,” he said. “I told myself I would give the tree life again so people could see it. I want tourist to come and look at it and be happy seeing my work.” The tree, now covered with intricate floral carvings, stands nearly 30-feet tall in an outdoor display area near his workshop.

One of the best places to spend an evening is a five-minute drive downriver alongside the Makong to Chiang Saen, the administrative center of the area and the designated port of entry for international cargo from China or Laos. It’s a bustling market town with lines of vendors beside the riverbank, who sell local hill tribe handicrafts and imported items. Nearby are hill tribe villages that can be visited on private tours or by private car. An interesting relic of the past rests on a hill overlooking the town, the site where the Nationalist Chinese Soldiers Cemetery is located. It’s the final burial place for more than 200 Kuo Ming Tang soldiers (Nationalists Party of Republic of China). The graves are angled on the hill to face in the direction of China.

Chiang Saen has a small foreign expat population, largely citizens of Canada, Germany, Japan, Australia and the U.S. A local realtor, Sugit Tomara, credits the foreign community with the building a popular golf course. Land and home sales in the area have been climbing, but they’re are still low by Western standards. About one acre on the outskirts of the city can cost from $5,000 to $9,000 and could rise to $25,000 or more in town or along a major roadway. A modest Thai-style, two-bedroom home might start around $30,000 and increase in price depending on size and amenities. An acre of land on the Mekong River in or near Sop Ruak could cost as much as $200,000. 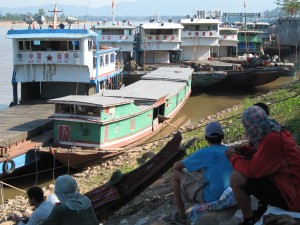 Life in Chiang Saen is destined to get busier with the planned expansion of the Thai river port docking facility, to be located south of the present docking area. The director of the Thai Marine Office, Apisit Kumpiroj, said the expansion will eventually double the cargo volume to nearly 1 million tons annually. Currently, about 27 cargo ships a day are off-loaded at the port, but this will increase to nearly 50. On-loading and off-loading is done the old fashion way, largely by hand. The riverbanks are lined with stevedores who manhandle crates, boxes and other goods. The port takes in about 100 flat-bottom Chinese boats a week. More export goods go to China than are currently imported from China, but that will change soon. Locals see the creation of a regular river passenger service to China as inevitable. Passengers from China book crude accommodations on some cargo boats coming in to Thailand at a rate of about 200 or more each month, while a hundred or so people depart from Thailand. Only the most adventurous Westerners now make the trip on the Chinese cargo boats.

Chiang Saen also has a very worthwhile National Museum that displays pre-historic artifacts, ethnic textiles, hill tribe crafts and traditional musical instruments. Asian art lovers will pause to take in a collection of Taoist ceremonial scrolls called “The Dragon Bridge of the Great Tao,” a series of 17 scrolls arranged in a specific order that depict Taoist gods and spirits, probably painted in the late 19th century.

While Sop Ruak is evolving into a major stop on the tourist trail, and Chiang Saen will only get more crowded with visitors heading to China or Laos, once you step out of the package-tour zone  these two Thai river towns, and the surrounding mountain area, offer real pleasures.  At night in Chiang Saen when a string of Christmas tree-colored lights pop on at a riverside restaurant and a Chinese cargo ship silently slips by on the river with its solitary white running light scanning left to right in the darkness, you feel for a moment as if a great mystery awaits just around the bend in the river.