The House of Opium in the Golden Triangle 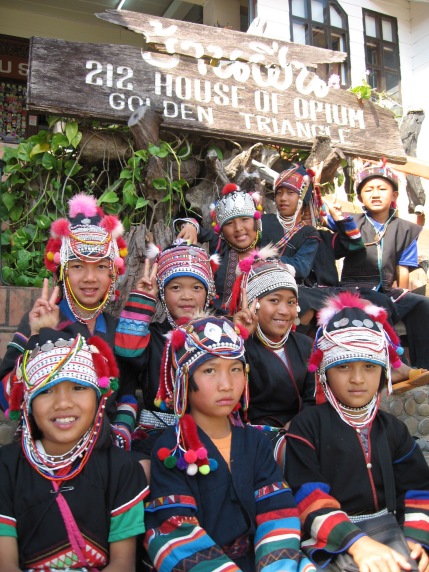 Ethnic girls selling hill tribe crafts in front of the House of Opium at Sop Ruak, Thailand, on the Makong River. 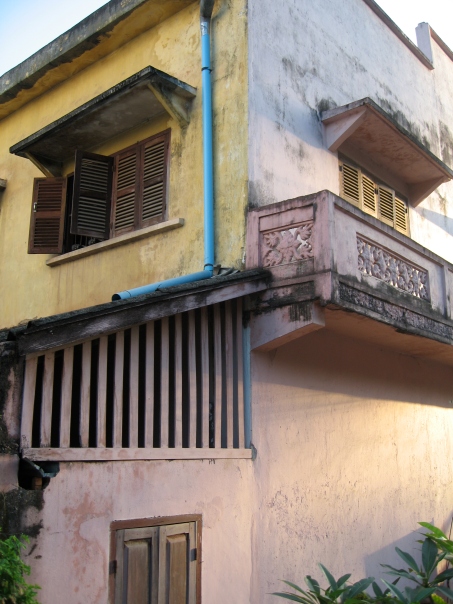 Evening light on the corner of a building sometime in early 2000s. 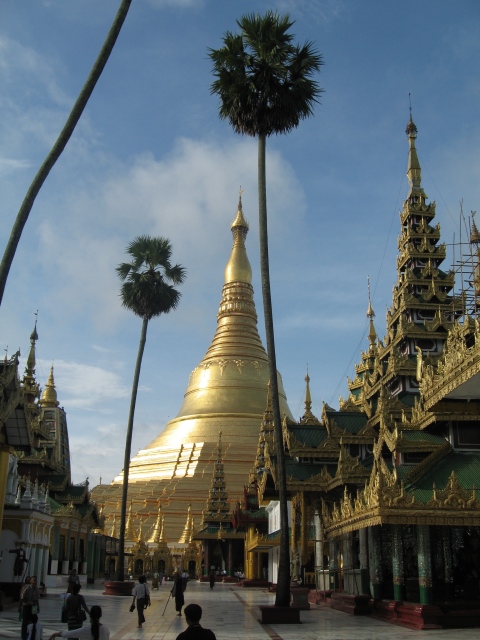 YANGON, Myanmar — A few long, wispy hairs dangled from the chin of the old, brown-robed monk. The skin on his hands was polished like dark parchment. Wearing a brown conical peaked cap, he looked like he was from an earlier age.

Hope for a better life

At mid-afternoon on the day I visited the temple, spiritual reverence filled the air. Streams of pilgrims, both men and women wearing the traditional longyi skirts, supplicated themselves before the golden stupa and the smaller temples and shrines, some of which are believed to house symbolic Nats, or spirits. Families placed mats on the ground and set out steamed chicken, fried bananas and cups of sweet milky brown tea, preparing to spend the day.

The light surrounding the stupa casts a poignant spell. To say the stupa is golden misses it entirely. The air around the stupa is golden. The air seems to sparkle, the brilliance enhanced perhaps by the 1,383 gemstones embedded in the stupa’s surface  and especially by the single, radiant 76-carat diamond placed at the top of a diamond-filled orb, which I fancied I could actually see while standing at the exact spot where the old monk had placed me.

“It’s a nice view,” he said, his teeth dark yellow from tea and betel nut. Earlier, the monk had walked me around the temple complex. People paid him reverence and gave him space. Jathei (hermit) monks, a lineage of solitary wanderers, are highly respected for their use of herbs and potions to treat people’s physical and psychological ailments.

Many Jathei monks are homeless, roaming through rural Myanmar. Sometimes they can be spotted at their forest retreats by the small, round huts they build from twigs and large leaves. He said his last retreat was in the forest near Taungbygone, 20 miles north of Mandalay. He’d started walking toward Yangon two months earlier. This would be his last visit to the temple, he said, because he planned to move deeper into the forest.

A few steps removed from the diamond’s sparkle was a shrine to Thanga Min, the king of the Nat spirits. Nat worship is the belief that spirits can exercise a good or evil power over a person or a place, such as homes, trees, hills or lakes. There’s a saying that the Burmese people play it safe: They practice Buddhism for the future life and give gift offerings to Nats for problems in this life. A moment later when I turned back toward the monk, he was gone. I had wanted to ask him more about his life. I searched through the crowd, but he had disappeared.

A country of extremes

From the temple, I hailed a taxi, a 1956 Toyota. I had promised myself a dinner at the Strand Hotel, one of the legendary hotels of the East. The driver, named Htin Swe, was another one of those Myanmar citizens you frequently meet who describe themselves as university students. They are typically in their late 30s or 40s. They explain their studies are incomplete, through no fault of their own. Myanmar universities are usually closed more semesters than they are open, a sign of the fear the ruling military junta has of students and the people. In 1988, the junta, now known as the State Peace and Development Council, gunned down more than 2,000 students, men, women, children and monks during a demonstration in Yangon.

I asked Htin Swe what he studied.

Like most of Myanmar’s ordinary citizens, Htin Swe was a poignant mixture of sincerity and arrested development, emblematic of a people and a country with enormous potential that’s been trapped in a time-warp closer to the ’50s than today’s world.

When the concierge swung open the high wooden doors of the Strand Hotel, built in 1901 by two Armenians, the Starkie brothers, I entered a world light years away from everyday Myanmar life. Recently remodeled, the hotel had retained its distinctive colonial-Asian charm and elegance with a shiny, black grand piano dominating the lobby. The natural oak and rattan furniture featured white cushions. In the nearly empty dinning room, leather-bound menus and heavy white parchment paper were stamped with the Burmese lion emblem. Delicate purple flowers sat in crystal vases on each table, and a young woman played a lilting folk melody on a xylophone.

The stark contrast between the refined Western inner world of the Strand’s elegance and the outside world of daily Yangon street life still seemed very colonial British.

Clearly, Myanmar is a country of extremes — of haves and many have-nots. Average citizens have little money or opportunity and have been repressed for decades. However, the country is slowly opening up to tourists and travel within the country is easier. The feelings you take away from a trip to Myanmar are deep, running an emotional gantlet from awe to sorrow.

As I left the Strand Hotel, I thought of the old monk at the temple. I had tried to take his picture, but he wouldn’t allow it.

Roy Hamric writes about Southeast Asia for newspapers and magazines. 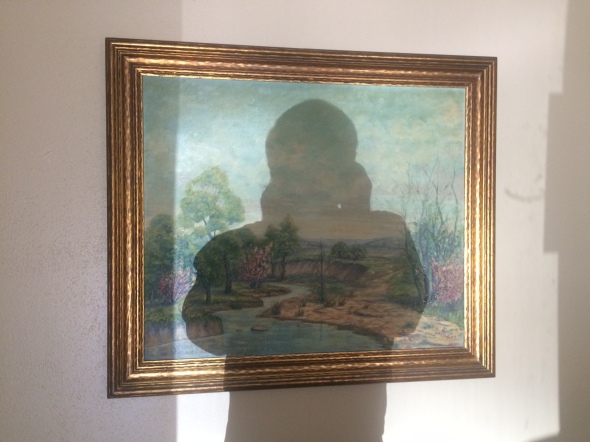 This painting, by Ava Milner Hamm,  is one of my earliest memories, a landscape of country that starts west of Fort Worth. The painting was always in the two houses where I grew up. I have lived with it in sight (or memory) for all of my life. It always tells me I’m home. 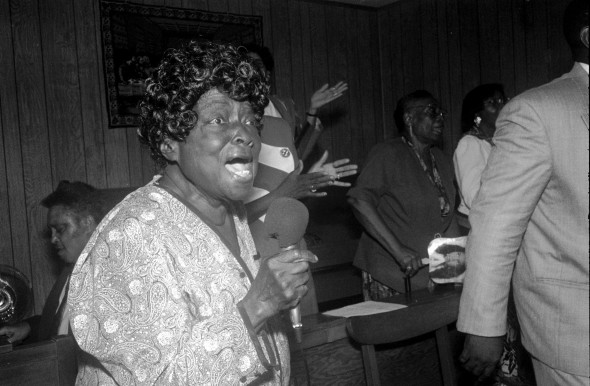 Part of a documentary photography project I worked on in the 70s and 80s. 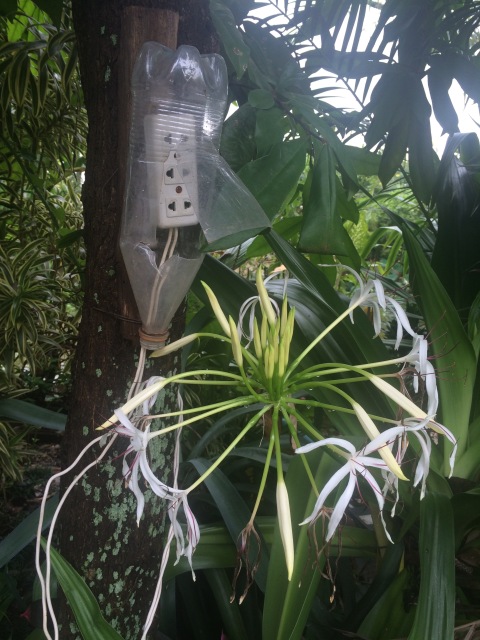 Part of a documentary project on backwoods churches in The Big Thicket country of southeast Texas that I worked on during the ’70s and ’80s.

First You Must Last

Ernest Hemingway’s boyhood home in Oak Park, Ill. “Il faut, d’abord, durer.” – (“First of all, one must endure.”) – A saying of Hemingway, from a letter.

Kyoto: Walking One Step at a Time

Where else better to take a thoughtful walk than in Kyoto, home to so many worthies who have graced its streets and paths. Ted Taylor and Michael Lambe have put together a paean to walking through Japan’s most intimate city, savouring the ancient temples and today’s artful graffiti. The anthology, Deep Kyoto Walks,  includes Pico Iyer and others, and this is one of those books that takes you to where you didn’t know you wanted to go. Sixteen writers who know Kyoto pay tribute to life in the city of “Purple Hills and Crystal Streams,” offering a testament to the art of contemplative city walking.

“I had to acknowledge that I had to come to Japan in order to see that a 7-Eleven here was just as Japanese — as foreign — as any meditation hall, and no less full of wonder…” – Pico Iyer, Into the Tumult

My friend Frank X. Tolbert has always been one of my  heroes, and I’ve missed him a lot in recent years. He lives in Houston. His father was a famous journalist with the Dallas Morning News. Frank is one of those people who nourishes your soul when you’re around him, and he doesn’t have any clue what he’s giving to you. Frank and I shared a friendship with a man who was a hero to both of us: Roxy Gordon, a writer, poet, and another one of those people who give you things without knowing it.

Here’s a few samples of Frank’s work. See his Facebook website here for a taste of X’s style. See more of his art here. 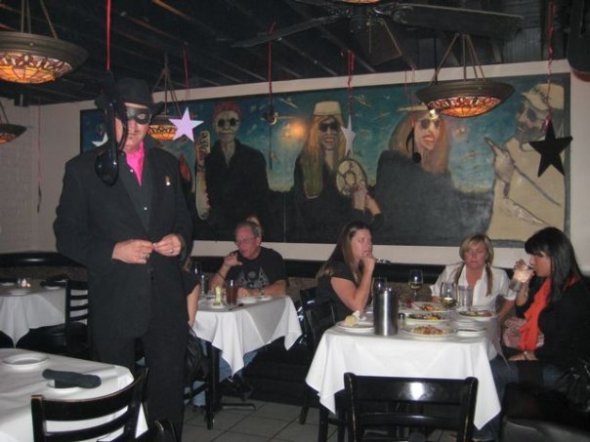 Frank X. Tolbert, standing on the left, with one of his large paintings in the background. 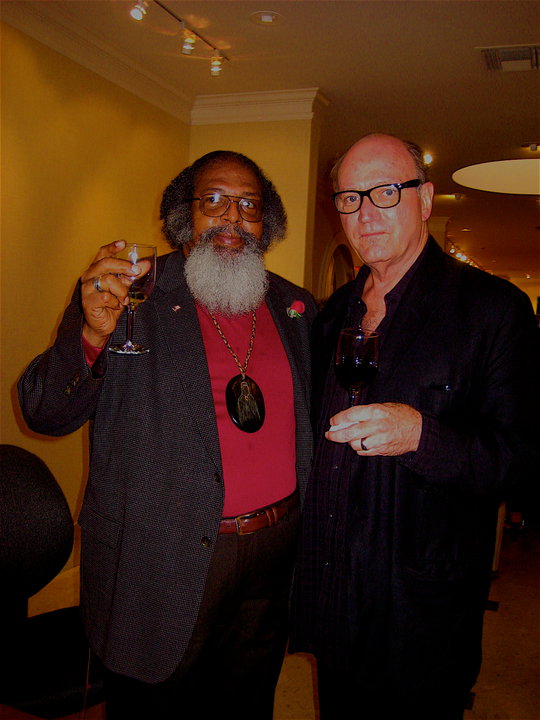 Frank, on the right, with an artist friend 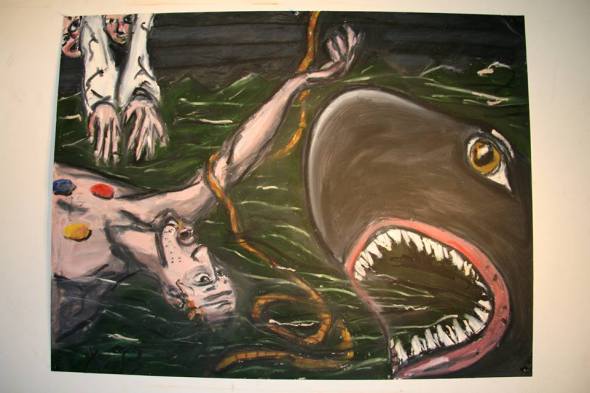 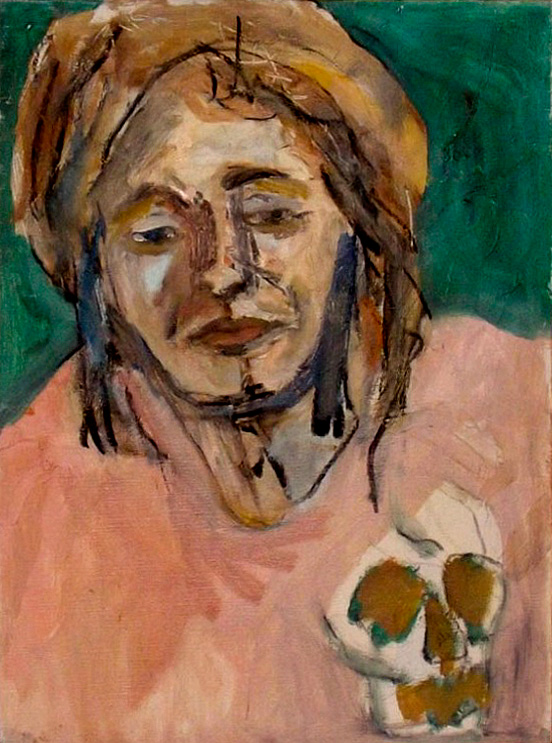 A painting of Roxy Gordon by Georgia Stafford.

Go here to see a sample of some of Roxy Gordon’s poems and writing and check him out on Amazon for some CDs of his poetry-songs. Note the death mask in the right corner.