← Sounds like Wittgenstein, but isn’t
Oval Dreams on the Dirt Track → 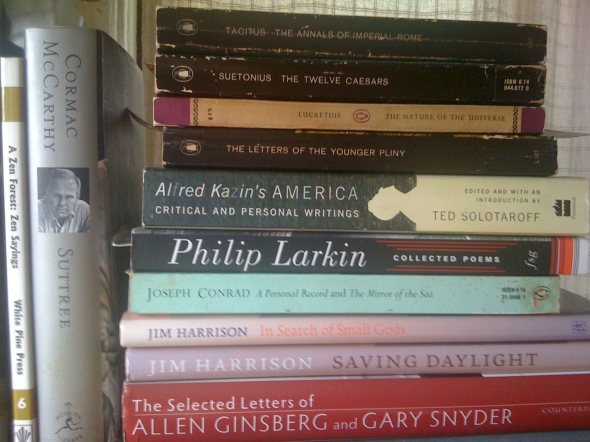 The Annals of Imperial Rome by Tacitus: What a bracing wake-up call. I would have forever been prepared for the ways of the world had I read Tacitus, Suetonius and Pliny when young. The perfect time would have been while I was a lowly volunteer in the Army, and prior to the mesmerizing days of the Kennedys and the Civil Rights Movement. Unfortunately, I was taken in by the American myth, and the Romans are the perfect antidote to keep one balanced and aware that the struggle against tyranny, dictators, totalitarianism, corruption and human duplicity, and, yes, evil, is part and parcel of humankind. Clive James’ Cultural Amnesia says the same thing, using the example of World War II and Communism. At any rate: a word to the would-be wise. Read Tacitus and Suetonius.

The Twelve Caesars by Suetonius: The Emperors of Rome show the whole range of human proclivities from monstrously evil to sublimely enlightened. Depravity and democratic principles existed simultaneously in the same city and state, and yet the structure of the government itself and the influence it wielded across its Empire had a lasting effect in jump-starting the spread of civilization. If only all the great libraries could have been saved.

The Letters of  the Younger Pliny: Pliny offers a window into the mind and culture of relative normalcy in imperial Rome. A lawyer and literary man, he shows the workings of power, influence, a passion for justice, administrative efficiency, wit and friendship. The voice is wrapped in reason and civility and shows that power needn’t be self-serving, vengeful or disrespectful. His letters demonstrate the power of the individual who can personalize their professional and daily life in words, therein creating a record of  their time rivaling any historical narrative. Without such writing we are forced to rely on a storybook reading of history. As Emerson said, “All history is autobiography,” because he saw it as the best history.

Alfred Kazin’s America: (an anthology) by Ted Solotaroff. One of the critics-as-artist, Kazin’s views on Twentieth Century American literature are part and parcel of the dream of American uniqueness and “democratic contentiousness,” and I’m still a sucker for this view, a blend of realism and romance. He does it well, and the man can put together streams of sentences that coalesce like honey around clear thought. Read him with Edmund Wilson and you’re well prepared to know wherein to read deeply and fully in American letters, from Jefferson to Mailer.