A look that opens up thought 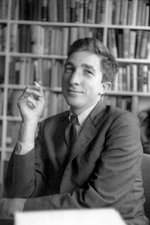 This picture of John Updike as a young man has all the qualities that are given to a portrait of a person caught in a “look” that dominates the traditional values of portraiture. The expression seems friendly, but is really closed, which sets off a search on the viewer’s part to understand what’s being shared. Is it satisfaction, is it a secret thought which at that moment the photographer could never grasp, is it pride, is it smugness (“I’m the new American Proust and I know it and the public doesn’t.”), is the photographer a woman bringing out Updike’s sexual curiosity, is he simply lost in a characteristic expression that really means nothing, is he thinking, “This picture will be known as my ‘author smokes a cigarette picture?’,” is it the hyper-curiosity that accompanied Updike’s grasp of the world before him, and we could go on and on. In short, it transcends common portraiture because we can never understand what it is revealing– it raises questions that provide no answers. What it emphatically says is there appears to be a blank piece of paper in the foreground and many books in the background, a worthy metaphor for his life.