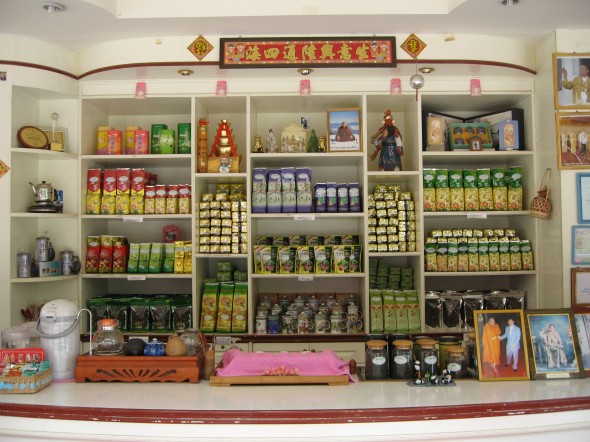 This story originally appeared in The Boston Globe in 2007.

MAE SALONG, Thailand – Uncle Soo, sporting a San Francisco Giants cap and a frayed US Army field jacket, sat on a wood stump at his neatly arranged desk. A classic Chinese herbal doctor, he has his pharmacy of plants, herbs and roots arrayed on the concrete floor in plastic bags.

He carefully poured me a cup of green tea, as puffs of white smoke spiraled around his head from the thin, brown cheroot dangling from his lip. Yellowed pages of old newspapers glued to the interior walls of the shop covered open spaces between the wooden planks.

“Green tea was one of the first medicines in old China,” he said. “Opium is a medicine, too, to heal pain.” 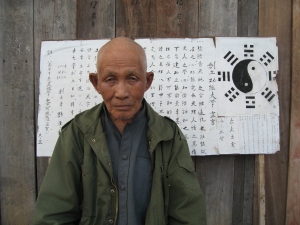 When talking about tea or opium, Soo, 91, is an expert. He served as an herbal doctor in the Kuomintang’s 39th Regiment shortly after it had retreated into Burma in 1949 following General Chiang Kai-shek’s defeat and exile. The battle-hardened Chinese carved out a fiefdom in the rugged mountains of Burma’s Shan State near the Thailand border and the regiment soon cornered a large portion of the poppy growing trade.

Led by General Ma Tuan, the army moved its base here in 1961, and the soldiers and their families created a Chinese way of life along this 3,800-foot mountain ridge. With more than 80 inches of rain a year, humid days and cool nights, the mountains provided a perfect location for tea plantations. By the 1980s, the community’s involvement in opium had subsided and almost all the Chinese in Mae Salong cultivated tea plants, which now cover the surrounding hills, or they operate businesses devoted to tea.

Fortified with the lingering taste of Soo’s green tea, I walked out to the main road in search of the real reason I had come here: to taste the town’s specialty, fine oolong tea. I wanted to learn how to appreciate fine tea, and this was the place to do it.

Today, the town has about 10,000 residents, and almost all the shops have something to do with tea: processing, tasting, selling, or promoting it. Some are elaborate, open-air structures devoted to a Zen-like presentation of the drink. Others are tiny street stalls with a single counter.

Of the many teas grown here, oolong, or Camellia sinensis, is a favorite variety that connoisseurs compare to fine wine. Seedlings were brought here from Taiwan decades ago. With some of the finest tea in Asia, the village, though remote, attracts hardy tea lovers who love the village rhythm, the nearby hill tribes and the mountain atmosphere.

I walked down the main road where Chinese characters on shop signs outnumber Thai script. As the Lisu and Mong traders began filling up the town’s market, the village felt more like China than Thailand.

I spotted a nondescript tea shop with only two wood tables and a few squat stools. A picture of the Great Wall of China adorned one wall. An elderly lady, her hair neatly pulled back in a bun, said in broken English her name was Madame Ming, and she offered to give me a short course in tea tasting.

“What kind of tea do you like?” she asked.

“There are many varieties,” she said, smiling. “What kind?”

“Please serve the one you like best,” I said.

She opened a plastic bag bulging with tea buds.

“Oolong has been used as a medicine for thousands of years,” she said, selecting three or four small buds. “Tea stimulates blood circulation and calms the mind.”

In scientific terms, it’s all about polyphenols and catechins, organic chemicals found in all tea leaves. The trick is how much oxidation to allow in the processing.

Silently, Ming prepared a pot of tea, pouring hot water into a small, unglazed, clay teapot. Such pots are said to improve with age and bring out the flavor in the leaves. After it had steeped for a few minutes, she poured the tea through a fine strainer into two cups. Then she picked one up and motioned for me to do the same, all the while inhaling the aroma.

It was Dong Fang Mei Ren, or Oriental Beauty oolong tea, which she said she saved for special occasions. Its color, light red, is one of its gifts.

With the first sip, it was as if I had never tasted tea before. There were hints of honey, peaches, and oranges on my tongue. I sought the flavors again with each sip, smiling at Ming in appreciation.

The tea’s color, its smell and its flavor signaled subtle pleasures. Each demanded attention and anticipation, or they passed unnoticed. It was another lesson in how to live – and how to travel. 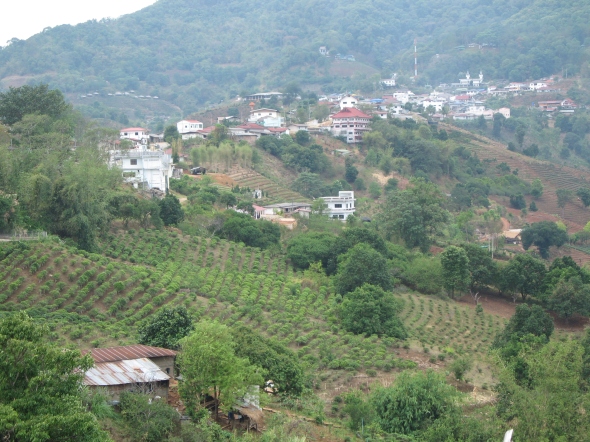 One Comment on “Mae Salong, a Thai tea village”