The Rain Tree at the Gymkhana Club 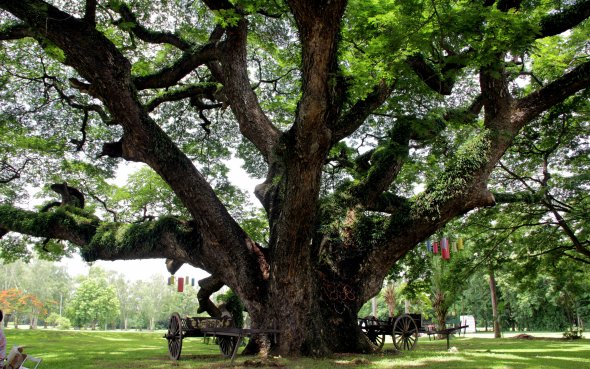 The rain tree at the Gymkhana Club in Chiang Mai. Photograph by Bruce Bridges

The Rain Tree at the Gymkhana Club

This essay appeared in the Kyoto Journal, Issue 79, Spring 2014.

Do not require a description of the countries toward which you sail. The description does not describe them to you, and tomorrow you arrive there and know them by inhabiting them. – Emerson, The Over-Soul

Many writers have left exact descriptions of their first taste of Asia. For Joseph Conrad, the East’s charm lived in his heart –  in what he called romantic reality. It’s what drove many of his best-known characters, like the young seaman in Lord Jim, who longed to lose himself, to be stripped down to a bare, primitive moment.

Conrad wrote, “This in itself may be a curse, but, when disciplined by a sense of personal responsibility and a recognition of the hard facts of existence shared with the rest of mankind, it becomes but a point of view from which the very shadows of life appear endowed with an internal glow. It only tries to make the best of it, hard as it may be; and in this hardness discovers a certain aspect of beauty.”

To be under the spell of a place, or a state of mind, quickens the blood. But behind the spell lies a deeper mystery imprinted in our subconscious – the desire to answer an unidenifiable call.

In the novel Youth, Conrad described the exact moment when Marlow, his narrator, first sensed the East: “… and suddenly a puff of wind, a puff faint and tepid and laden with strange odors of blossoms, of aromatic wood, comes out of the still night – the sigh of the East on my face.”

Marlow never escaped the spell of that sublime moment – the sense of life flowing from a new direction, a shift of culture from western to eastern. For some of us, it is a seduction of the soul.

Writing as Marlow, Conrad said, “But for me, all of the East is contained in that vision of my youth. It is all in that moment when I opened my young eyes on it…and I saw it looking at me.”

In the short story The Shadow-Line, he described the Bangkok of the 1890s, at the time of his first sighting: “One early morning we steamed up the innumerable bends, passed the shadow of the great gilt pagoda, and reached the outskirts of town. There it was, spread largely on both banks, the oriental capital which had yet suffered no white conqueror. Here and there in the distance, above the crowded mob of low, brown roof ridges, towered great piles of masonry, king’s palaces, temples, gorgeous and dilapidated, crumbling under the vertical sunlight, tremendous, overpowering, almost palpable, which seemed to enter one’s breast with the breath of one’s nostrils and soak into one’s ribs through every pore of one’s skin.”

A very different writer, the cosmopolitan Somerset Maugham, in the early 1920s, toured Burma and Siam. In a nearly forgotten travel book, The Gentleman in the Parlour, he captured a fading moment when Bangkok had yet to blend in with the West:

“The traffic of the river ceased and only now and then did you hear the soft splash of a paddle as someone silently passed on his way home. When I awoke in the night, I felt a faint motion as the houseboat rocked a little and I heard a little gurgle of water, like the ghost of an Eastern music travelling not through space but through time.

“A leisurely tram crowded with passengers passes down the whole length of the street, and the conductor never ceases to blow his horn. Rickshaws go up and down ringing their bells, and motors sounding their claxons. The pavements are crowded and there is a ceaseless clatter of the clogs the people wear. Cloppity-clop they go, and it makes a sound as insistent and monotonous as the sawing of the cicadas in the jungle.”

Alex Waugh left a portrait of expatriate, turn-of-the-century Siam in Hot Countries, published in 1930, nearly three generations removed from today. Describing colonial life and the “natives” in Chiang Mai, he reflected the racist attitudes and language that permeated colonial culture. A well-educated Englishman, he presumed Western superiority, and his attitudes reflected the repression and guilt surrounding sexual mores. He used the expression “gone native” as a rebuke to Westerners who entered the normal life of Asian culture, or who openly took wives or girlfriends and shared their lifestyle. As a journalist who racked up books about exotic countries like they were way stations on a news beat, Waugh described “white life” in old Chiang Mai.

It was especially difficult on Western women, he wrote, and he urged them to stay home rather than endure a life of isolation, boredom and disease. He admitted he’d never personally known of a case of a white man who had “gone native,” but he’d heard rumors and had constant suspicions. The “gone native” phrase was nuanced – most of the time it was a code word for sexual relations or cohabitation.

“In the popular imagination,” he wrote, “the ‘gone native’ myth has become identified with that very different, very real problem of the tropics – the white man and the brown woman.”

It’s easy to pass over 19th-century Western attitudes and the social barriers faced by both Westerners and Asians. But a careful reading makes you cringe. Waugh wrote: “In Bangkok, it would be impossible for a white man to have a Siamese girl living in his bungalow, but on the plantation there is fairly often a Malay girl who disappears discretely when visitors arrive. There the relationship has a certain dignity.  There is faithfulness on both sides. Custom creates affection. But in neither case is there any approach to the ‘gone native’ picture.  In neither case has the white man done anything that involves loss of caste.  He observes the customs of the country.”

In scalding sentences that magnify the distance, he wrote: “All the same, I believe it is extremely rare for there to exist a profound relationship between a white man and a brown woman.” Again, “I have yet to meet the man who will say that he has really loved a coloured woman.”

To get to Chiang Mai, Waugh took the Bangkok passenger train for the 27-hour journey north. If you went by river, it was a five-week journey. Chiang Mai was the administration center of two large timber companies, the Borneo and Bombay Burma. Waugh felt he was going to the end of the road where the “white community” had to unite together against a “common foe.”

“There are not, I fancy, more than thirty white people in the station,” he wrote. “There is the bank manager and the English consul; there are the forest manager, and an occasional assistant who has come in from the jungle for a rest; there is an American mission which is responsible for schools and the hospital and a big sanatorium for lepers.”

The social “white life” of Chiang Mai was centered around the Gymkhana Club, chartered in 1898, which is still in operation today.  As I write this, I sit near a majestic rain tree that is older than the club, its huge limbs casting shade over outdoor tables.

“It is a large field set a little way out of town which serves as a polo ground, a golf course and a tennis court,” Waugh wrote. “By five in the evening, most of the white community is there. There is 75 minutes of strenuous exercise, then there is a gathering around a large table on which have been set out drinks, glasses and a little lamp. There are rarely more or rarely less than a dozen people there…the women have slipped their legs into sarongs, sewn up at one end in the shape of bags. Their life is hard and testing.  It has many dangers, many difficulties. It is only by mutual tolerance, by interdependence, by loyalty and friendship that it can be made tolerable.”

The rain tree is a stone’s throw from the northern bank of the Mae Ping River as it winds past the city’s old Chinese night market and main tourist hotels. For decades, the club remained a tranquil oasis of white privilege, but after WW II it fell on hard times. By the 1950s, the last of the Western lumber concessions had disappeared. Club membership had dwindled to less than 20, and to avoid bankruptcy the directors voted to offer 12 Thais full membership. By early 2000, the club membership rebounded to around 300 people. Thais numbered about 60 percent and one Westerner served on the board of directors.

The centerpiece of the club is still the venerable rain tree, marking the passage of time. Its shade certainly fell across the figure of the visiting Waugh, whose cultural blinders prevented him from truly knowing Asians. To know the other is as hard as to know one’s self, if not harder.

To live here one would be charged in the quiet, small currency of the conscience. – Graham Greene, describing Vietnam in  his essay collection, Reflections.

The three generations between Waugh’s Hot Countries and Greene’s The Quiet American, published in 1955, saw sweeping changes in cultural attitudes. The world grew smaller.  In The Quiet American, the correspondent Thomas Fowler, Greene’s alter ego, admits his love and his desire to marry his Vietnamese mistress, Phoung. But his cynicism and sense of superiority still color the relationship. At first, it’s as if he is taking on a beautiful naïf, a woman perfectly designed to be of service to a superior Western man. Later, Fowler learns that the reverse might be closer to the truth.

Phuong is a classic Vietnamese mistress, a heroine who deftly controls and dispenses her emotions and affections between her interests in Fowler and his nemesis, the wide-eyed, naive American, Alden Pyle. She’s capable of breaking the idealistic Pyle’s heart, but she presents little romantic danger to Fowler, who strives to be the dispassionate observer, a stoic who sees emotional attachment as vulnerability. Fowler is a post-colonial man poised at a moment of romantic growth, but just barely. He starts with the typical, Western cultural baggage that is still lugged around today by too many expatriates arriving on Boeing 787s.

Fowler thinks: “It is a cliché to call them children – but there’s one thing which is childish. They love you in return for kindness, security, the presents you give them – they hate you for a blow or an injustice.  They don’t know what it’s like – just walking into a room and loving a stranger. For an aging man, it’s very secure. She won’t run away from home so long as the home is happy.”

Later, his cynicism is shaken and his emotions expand when he realizes Phuong “was as scared as the rest of us – she didn’t have the gift of expression, that was all.” Greene gives Fowler an emotional breakthrough when he finally grants Phoung equal emotions – something he should have understood long before, but worth learning at any age.