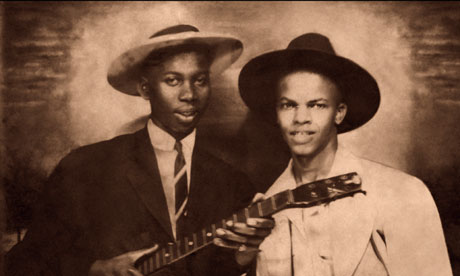 The man on the left has been identified as Robert Johnson, the legendary blues singer and guitarist.

Only two verified photographs of Johnson (1911-1938) existed until now. Eric Clapton once said Johnson was “the most important blues musician who ever lived.”  A third, newly cleaned-up and authenticated image has been released by the Johnson estate showing him standing next to musician Johnny Shines.

Work on the photograph began in 2007, when Lois Gibson, who works with the Houston police department, analysed the features of the long-fingered figure holding the guitar. Gibson, who found the identity of the sailor kissing the nurse in the Life magazine photo of Times Square on VJ day during the second World War, said forensic techniques showed a match between this photograph and Johnson’s image in two other photographs, which were previously thought to be all the photographs of Johnson that existed.