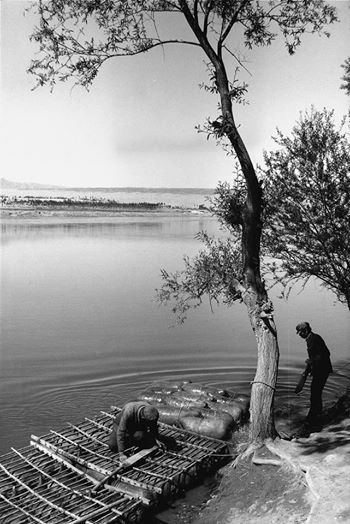 Here’s one more picture from Bill Porter’s new book, Yellow River Odyssey, which should be released soon by Chin Music Press, a small publisher of elegant books based in Washington state. The caption reads: “After another hour among the dunes, we headed back to Shapotou, where I cooled my heels in the Yellow River mud and talked with several men who were inflating goat skins and lashing them to wooden frames to use as rafts. Sheepskins, they said, were useless. Goatskins were the only the skins that held air long enough, and they had to be coated on their insides with sesame oil to keep them from cracking and to maintain their flexibility.”