← Kyoto: Walking One Step at a Time
About That Bowl →

Jim Harrison’s amazing body of poems and fiction and, equally important, his way of life and mind, have  a new   fan, who has written one of the most interesting takes on Harrison I’ve read lately. Rakowski is a young writer whose first novel, The Delivery Cut, is in the early spirit of Thompson’s The Rum Diary, and he’s done a series of interesting reviews and interviews on the Three Guys One Book website. Here’s the first few hundred words of Rakowski’s long, perceptive review. The full story can be read here. What I like about Rakowski, besides his protective, tender response to Harrison, is this picture of Rakowski (below) reading from his novel while standing on top of a bar. Way to go…here’s Rakowski’s website

“Some people hear their own inner voices with great clearness. And they live by what they hear. Such people become crazy… or they become legend. ” –Jim Harrison

From Rakowski: “In the land of the blind, the one-eyed man is king. If you have read Jim Harrison, more than likely, you were blinded by his poetry and prose.

“I’ve heard of Jim Harrison since I was a young boy, but it wasn’t until I received a catalogue from Grove Atlantic that I sat down, away from my own selfish paperback endeavors, and decided to read nearly everything by one of the greatest American fiction writers of all time. What kind of egotistical, navel-gazing writer out there doesn’t take this opportunity? What more impetus does an aspirant literate need?

“After requesting everything Grove had to offer, I sent Copper Canyon a message requesting his poetry and hit the local library and bookstore for his earlier stuff. Within a week, I had received from Grove Atlantic Harrison’s memoir Off to the Side, his adventures as a roving gourmand The Raw and The Cooked, and his fictional novellas and novels Julip, The Summer He Didn’t Die, Returning to Earth, The English Major, The Great Leader, The River Swimmer, and Brown Dog. Copper Canyon sent me The Shape of the Journey and Songs of Unreason, nearly 600 pages of poetry. From the store, I purchased The Woman Lit by Fireflies, Dalva, Wolf and Legends of The Fall.

“Overall, the fifteen books weighed around twenty-five pounds in mental edibleness. I know because I put them on the scale at a grocery market impressed by the idea of the weight of one man’s knowledge.

“I started my journey on a plane to Boston reading his memoir and poetry. Harrison, which I will refer to intermittingly as Jim because I feel a part of his soul wove its way into mine, considers himself a poet first. It seemed like the auspicious place to start, though I am in the wolf stage of my life and Harrison is in the bear and raven.

“When I think of individual poems, I think of a completed, one or so page, story. As I finished The Shape of the Journey and Songs of Unreason, the first and last of Jim’s poetry, I realized I had not read one completed story at the ending of each poem. Instead, I’d watched as each poem escorted itself to the next, producing a book of a man’s life written doggedly over the course of his existence. Through poetry and in the beauty of morality, it was the most complete story I have ever read about a man’s life. It was chronological to the point of despair, complete to the point of tears, and maddening to the point of self-reflection.” …Continued… 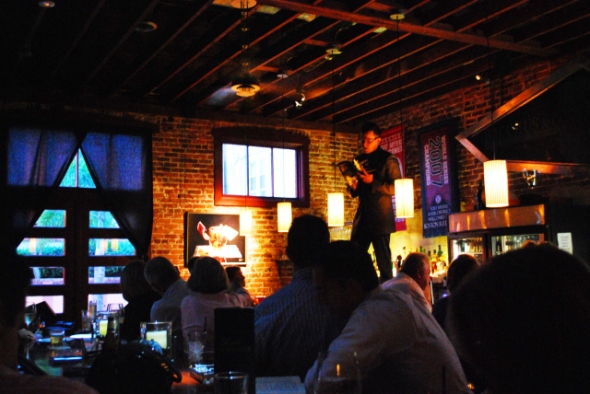