← Ralph Waldo Emerson: Give All To Love
A Manifesto For The Future → 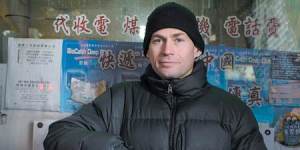 By all accounts, Atticus Lish, the son of the editor Gordon Lish, has written a great American novel, in the fullest sense of American. Preparations For The Next Life… I haven’t read it yet, but I can’t resist helping to spread the word on this one. Here’s the New York Review of Books review, and several interviews with Lish on his background and how the book came together. Interview here, here and here.

Here’s the opening paragraph of the NYRB review by Cathleen Schine:

“Preparation for the Next Life, by Atticus Lish, is an astounding first novel about a world so large there is, sometimes, nowhere to go; a world so small the people in it, sometimes, get lost. The book has the boundless, epic exhilaration you expect to find only in a writer as mighty as, say, Walt Whitman. It is a love story, a war story, a tale of New York City in which familiar streets become exotic, mysterious, portentous, foul, magnificent. Some of it reads like poetry. All of it moves with a breathless momentum.”