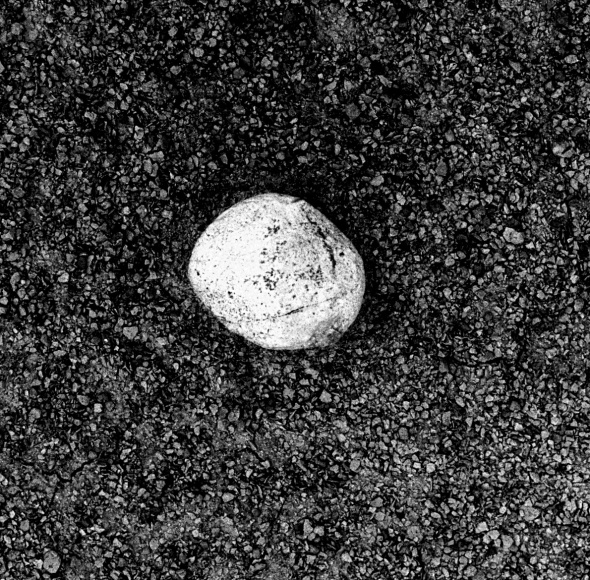 a rock on the ground in the Big Bend near the Rio Grande (photograph: roy hamric)

An earlier version of this review appeared in The Kyoto Journal.

But the poetry that thinks is in truth the topology of being.—Martin Heidegger

David Rothenberg’s book of poetry is based on his response to “The Blue Cliff Record,” the venerable koan collection, and has been launched with kudos from Sam Hamill, Frederick Franck and Mark Rudman, all esteemed poets.

Rothenberg is a poet and muscian, the author of “Sudden Music” and “Hand’s End,” and he is the founding editor of Terra Nova, a magazine devoted to deep ecology. A contributing editor at Parabola magazine,  he also teaches philosophy.

Hamill, the poet and translator, notes in a foreward the long tradition of writers reinterpreting the work of other writers, giving renewed life to key ideas and images. Rothenberg labels his poems “echoes,” and he freely plays with the Blue Cliff Records’ koans and the “pointing” verses, spinning off his own interpretation and images based on his perspective and poetic sense. As students of Zen learn, koan “cases” are presented in a straight forward narrative by the writer, and they’re usually followed by commentary and short verses intended to highlight aspects of the case, a sort of coda that offers the student a breakthrough perception or idea.

Here is Rothenberg’s poem  “The Cat Could Have Lived,” based on  Case 63:

I took off my sandals, placed them on my head.

If you had been there, you could have saved the cat.

You two on the same road would know that.

You may murder the cat, it’s none of my business.

The sandals don’t purr, and torn they won’t scream.

If someone dies for them these puzzles matter.

You must try to care, if you wish to live.

Cumulatively, this type of Zen verse works something like a waterfall in Nature. We see the surface, and we are sometimes anesthetized by it, but we’re eventually led to wonder what’s behind this flow of words that sparkle inside our mind and endlessly circle around. These poems challenge, cajole, dare and nudge us deeper inside our mind and are worthy esthetic companions to the seemingly impenetrable koans.

Rothenberg knows his Zen esthetics. Slashing directness, grandiose overstatement and sharp minimalism are esthetic staples, and they are frequently used back to back in a line of Zen poetry. He understands the affect and mines this tension­­––”The great waves rise up a thousand feet”––but ”only a single shout is needed”––leading the reader one way only to be snapped back to simple reality.

Certainly, the best Zen poetry rests on compression.  For that reason, koans and poetry have always had a kinship in the hands of people like Rothenberg, who have something to say beyond mere words.

One right word is all it takes

it can smash the chains and break down he gates

Who knows such words?

––Look around you and see,

What’s the use of today?

shock the country, stir up the crowd

swallow all in one gulp and dwell in the clouds

Look back at that monk who could walk across water

Don’t let him get away with it:

“You smug fellow, if I had known you could conjure up wonders,

I would have broken your legs!”

Then he who speaks disappears

Zen teaching has always divided its methods between the body and the mind. Break down the body in unrelenting, regular sitting––allow the body to come to silence like a horse to water. Break down the mind in linguistic disjunction––allow the mind to severe the bind of language to meaning; make language revelatory: allow it to reveal the truth of being. Such approaches, throughout Zen history, alternate between using non-sensical language constructions and sublime poetic beauty. Take your pick, either one might do the job.

Walter Benjamin, the astute critic of culture and mind, saw language itself as the primary subject of interest––and not just its role in creating a subject and object. He preferred to see language as a medium (in his case spiritual) where the absolute and the relative might be/are bridged. Rothenberg’s sense of poetry fits this view.

These poems have a sure, unforced lyrical touch.  But they are not about lyricism. They are about our unending mentality, about the mind’s inate naming and circling from the expressible to the inexpressible. They take the reader on an exhilarating ride through knotty koans and Zen poetry.

Their goal is small, to give pleasure, and large, no less than to reach the other side of the river of words run by so many poets over the centuries.