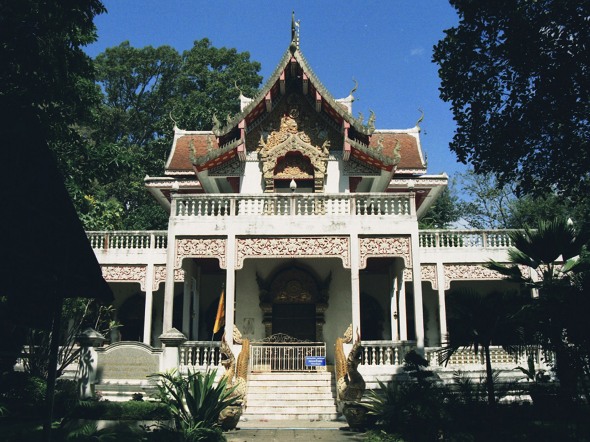 This article originally appeared in The Boston Globe.

Foreigners first began visiting Chiang Mai in the late 19th century when the British opened a mountain station to extract teak and other timber. During the Vietnam War, Americans found it to be the most beautiful and sleepy of Thailand’s mountain cities. Today, it’s ranked among the top of Asia’s most livable cities list and an increasing number of Chiang Mai’s Buddhist wats, or temples, are drawing more and more Westerners seeking meditation retreats.

Many falangs (foreigners) are forsaking the more traditional spas and venues that offer massage, Thai cooking and yoga classes for Buddhist studies classes in English and Thai-style meditation retreats from one to 21-days or longer.

A popular temple among Westerners is Wat Umong, one of Chiang Mai’s 300 wats, located in the foothills of Mount Doi Suthep, which rises 5,478 feet above the 1,000-year-old city. “Wat” is a Thai word from the Pali-Sanskrit word meaning “dwelling for pupils and ascetics.” Wat Umong’s history goes back to the 14th century.

On the densely wooded temple  grounds, moss-covered limestone sculptures of the Buddha are scattered over the grounds, some nearly completely covered by climbing vines. Small kutis–– self-sufficient huts that house one monk each––are bathed in yellow sunbeams filtering through the leafy canopy. The deep murmuring sound of monks’ chanting sutras filled the evening air. Blue signs with white lettering offered helpful aphorisms: “Today Is Better Than Two Tomorrows.” “I have not failed––I found ways that don’t work.”

One Sunday afternoon, I joined sixteen foreigners who sat quietly in a red-roofed Chinese Pavilion area near a two-acre pond. Green algae circled the pond’s edge extending out almost to its center, leaving a circle of water where large turtles poked their snouts into the air.

Nirodho Bikkhu, an Australian monk who lives in a nearby kuti, walked into the pavilion and sat down. He adjusted his brown robe and smiled.

“I would rather answer your questions and just talk. Does anyone have a question?” he asked. Moments of silence. Finally, a young girl with bronze skin from days on the road asked: “Is reality real?”

The monk smiled. Speaking slowly, he explained what the Buddha said about objective and subjective views. He talked about meditation as a way to experience the mind, the senses and the body. He talked about a concept in Vipassana Buddhism of small, discreet divisions of mental activity that can take years of meditation to fully distinguish. “They pass by unnoticed by most people,” he said.

More silence. Then an American lady asked: “What about bardos,” the different stages of the death-journey found in Tibetan Buddhism.

“I speak only about what the Buddha said,” Norodho Bikkhu answered.  “bardos are concepts found only in the Tibetan Book of the Dead.”

A young American woman, Laura Robbins, listened quietly to the monk, and stayed the full two hours. After everyone left, she had a private conversation with Nirodho Bikkhu.

Later, walking beside the pond, she said she was starting a 21-day meditation retreat in two days at a nearby  monastery.

“A little serendipity got me to this point,” she said. While on vacation, she had a conversation with the owner of a Thai restaurant who gave her the name of an American woman who teaches meditation at a wat outside Chiang Mai.

“I choose that temple,” she said, “because of what the woman teacher said, and I liked it that there were a lot of nuns there.”

In the past, it took a lot of effort for Westerners to find a wat where they could receive introductory lectures on Buddhism or go on short or long meditation retreats. Like many temples, Wat Umong is rapidly expanding its offerings to Westerners.

“We will be a friend to anyone who wants to know more about Buddhism,” said Songserm Bikkhu, the teaching monk who directs Wat Umong’s newly opened International Buddhist Education and Meditation Practice Center, which has 17 rooms for foreigners, who can choose from one to four-day retreats.  The cost is a personal donation. Many Westerners give $4 to $6 a day.

“If people would like to take a retreat or to ordain as a monk and practice here, they can,” Songserm Bikkhu said. “If they would just like to come, learn and go and practice on their own, they can.”

A short distance down the road from Wat Umong is Wat Ram Poeng, built in 1451, with touches of Burmese Buddhist architecture. A popular meditation center with Asians and foreigners alike, the wat is home to the Northern Insight Vipasanna Mediation Center.

Eric Stirnweis of Fort Collins, Colo., was in his second week of retreat, along with other Americans and people from Sweden, Canada and France. While waiting for his daily interview with the abbot, he said he had already increased his walking and sitting meditation to about 12 hours a day.

“Here you eat, sleep and meditate—that’s it,” Stirnweis said. “They push you.”

At the end of the retreat period, he said, each student goes through “termination” – a three-day period of very little sleep and constant sitting and walking meditation.

The daily interviews are helpful, he said, but the practice is tough with lots of ups and downs.

“It’s different – no telephone, no e-mail, six hours of sleep a day at most, but it’s a healthy focus,” he said. “The abbot is definitely perceptive. I didn’t even say anything one morning, and he said, ‘Ah, there’s much negativity here.’ He seems to know you without talking to you.”

Wat Ram Poeng is in the process of expanding facilities to house up to 30 foreigners.

Frequently, foreigners who want even longer retreats are sent to Wat Dthat Sri, a sister temple. It also is in the process of creating a foreigner-housing area complete with small cottages outside the wat grounds.

An American, Kathryn Chindaporn, who co-directs the meditation center for foreigners with her Thai husband, remembered her phone conversation with Laura Robbins.

“This is a good place for basic or long-term practice, tailored to individuals,” said Chindaporn, who is from Evervett, Wash. “We use the mental labeling technique. The technique is easy. You think, ‘I’m taking a step with my right foot, or I’m feeling content or sad.’ It’s easy to use, but the practice makes it very deep.”

Chindaporn said she was on her way to India in 1986, but found herself staying on in Chiang Mai to practice full-time at Wat Ram Poeng, where she took classes in Buddhist studies, learned Thai and has since translated early Thai meditation texts into English.

Meanwhile, Laura Robbins had started her retreat at the wat and had begun daily interviews with Thanat Chindaporn.

“It’s going fine,” she said, while in her second day of the retreat. Ten days later, she took a two-day break, but planned to return the next day for another 10-day stay.

“It was very difficult,” she said. “I wanted to leave at least three times. I was surprised how hard it was––the simplicity of it was frustrating. 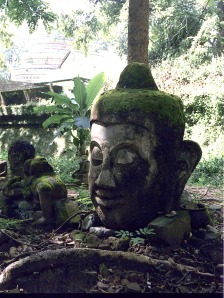 “My mind was running everywhere,” she said. “At the end we tried to practice for 72 hours straight. I had some very set ideas about who I am. I found that by pushing past that I’ve come out being much more gentle with myself.”

You can’t ask for much more than that in life.