← David Auerbach’s Blog, Waggish
Let There Be A Big Bend For All → 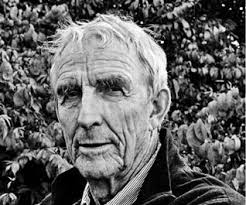 Peter Matthiessen is one of the rare greats, a man who took both spirituality and writing seriously. He never soft pedalled his Zen training and practice, and he wrote about it in his two perhaps most famous, or widely read, books: The Nine-Headed Dragon River, about a pilgrimage to Japan with his Zen teacher, and The Snow Leopard, about a trip to Nepal. This is from an NPR radio interview in 1989:

This is FRESH AIR. The publication of Peter Matthiessen’s final novel “In Paradise” is coinciding with his obituary. He died in April [2014] at the age of 86. We’re going to listen back to an excerpt of my interview with him. Matthiessen was a naturalist, as well as writer, and his fiction and nonfiction books were often inspired by his travels to remote regions, including mountains and rainforests. His books include “The Snow Leopard,” “Men’s Lives,” “At Play in the Field of the Lords” and “Far Tortuga.”

Along with George Plimpton he was a founder of the literary magazine The Paris Review, but it wasn’t until a few years ago that a documentary film revealed he was working for the CIA at the time and he used the Paris Review as his cover. I spoke with Matthiessen in 1989, before that revelation, and asked about a subject that was central to his life and his writing, Zen Buddhism.

He was initially reluctant to write about Zen. I asked him why.

PETER MATTHIESSEN: Well, I think it almost – in the nature of Zen, to speak about it is already kind of missing the point because Zen, the whole teaching depends on the immediacy and the spontaneity of this present moment. And the minute you talk about it, you’re introducing ideas and concepts that get in the way of seeing directly, which is the whole basis of the training.

And then to see behind it another way of looking at reality, which is what happens through meditation practice and really enhances one’s life. So there’s a built-in contradiction in writing about it. On the other hand, even the meditation is a tool, and the writing is a tool, and it helps people, prepares the ground for this sort of insight and training.

GROSS: Did you seek out Buddhism, or did you happen into it?

MATTHIESSEN: No, I didn’t seek it out, nor did I happen into it. I was – during the ’60s, very early on, my then wife, who since died, we were very interested in finding a teacher of some kind, and we couldn’t – there weren’t really any around in the early ’60s. And we got into experiments with LSD, and we did a lot of LSD during the ’60s not as a recreation but as a way of seeing something else, seeing things another way.

And that kind of wore out for her pretty early. I went on with it a bit longer. And she went over to Japanese tea ceremony and then from there, through friends, to a Zen teacher who was then working in New York City. And, I, a year or two later did the same thing and found that it was far more effective and far closer to what we originally had in mind than the drug use was.

GROSS: Had you ever asked any of your teachers what they thought about taking LSD?

MATTHIESSEN: I don’t think – I think they feel that any chemical is a screen that gets in the way, and I think that’s true. I think these drugs, if properly used, and if you knew what you were getting, which you don’t anymore – in the old days of LSD it was quite different because Sandoz Chemicals in Switzerland was making it, and you knew exactly what the dose was, and they knew exactly what the amount was.

But a Zen teacher, or any spiritual teacher, would be against it simply because you’re seeing things purely. There always is that, finally that chemical screen, even if you are having an extraordinary vision of existence.

GROSS: One of the founders of the school of Buddhism that you practice, Soto, had said that the way to be truly universal is to be particular, moment by moment, detail by detail. And I wonder if you see that as really applying to writing, as well, that to be universal you really have to focus on detail.

MATTHIESSEN: I think so. I think all really good writing is attention to detail. It’s that one detail, that one scrap of dialogue, one color or smell that brings the whole scene to life. You can’t throw in everything. You’d be just writing all day long over one small scene. So you have to find that one thing that the reader can build up from.

For example, William Faulkner, he was extraordinarily skillful. He would pick out one, or at most two, physical characteristics of somebody and then just repeat them over and over again, and the reader gradually builds up a whole character around that one physical detail because the detail is so well-chosen that it serves you in this way you can do it.

GROSS: I want to ask you something else about Zen, and this is from something that you said in your Zen journals book, “Nine-Headed Dragon River.” You were explaining that you were studying to be a Zen monk, studying in the States, and you had passed 13 of 14 checkpoints. You failed the last, which was about the vital expression of the inexpressible. And you said you were only able to come up with a weak intellectual answer.

I found that a fascinating thing to stumble on for a writer, and I was wondering if you’d tell us a little bit about what this means.

This is a Koan that stops you dead like an iron wall. I mean, where can you go with that logically? It just makes your whole logical apparatus collapse. And that’s the point of it, that you would see it all from a different way. And nonetheless, you could arrive at a kind of an answer, which would be adequate, a presentation which would be adequate, without quite understanding the subtleties and what’s behind it.

So there are 14 checkpoints of that Koan, and you have to pass all 14 of them, and they’re kind of increasing in difficulty and subtlety and so forth. So finally an intellectual answer is not nearly good enough. You have to manifest that Koan and present it, and this is part of the training.

GROSS: Well, let me ask you again how that connects with your writing. Has that training in not using the intellectual to explain or to understand helped you in your writing?

MATTHIESSEN: I wrote a novel called “Far Tortuga,” which is my own favorite of my books, and one reason it is is because I tried to replace, similarly in metaphor, an image with just these very simple descriptions of the thing itself, of, for example, the feelers of a cockroach coming out from underneath a galley cabin on a ship deck or the water vibrating in the rim of an oil drum on the deck because of the diesel motor, just these things, just to see over the line of birds migrating along the horizon, just if the reader could see those and see the immense mystery and hugeness of existence shimmering behind those very, very concrete details.

GROSS: Peter Matthiessen, recorded in 1989. He died Saturday at the age of 86.